vSphere is a server virtualization platform from VMware. It serves as a complete platform for implementing and managing virtual machine (VM) infrastructure on a large scale.

VMware vSphere includes the VMware ESX / ESXi hypervisor, a type 1 hypervisor that functions as the virtualization server; the VMware vCenter Server, which manages vSphere environments; the VMware vSphere Client, which is used to install and manage virtual machines through the hypervisor; and VMware VMFS, the file system component from VMware. 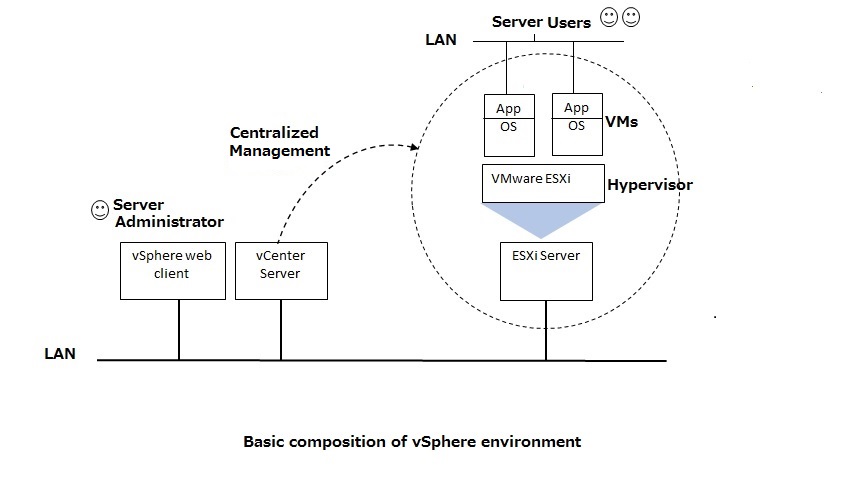 •In case of physical server the consolidation ratio would be 1:1, i.e., one OS mounted on a single server. But in case of virtualization, separate OS can be mounted on many VMs of a virtualized server. This server consolidation reduces energy cost by up to 80% resulting in “going green”.

•Server utilization is very high at 80% in case of virtualized one when compared to the physical server which is just 20-30% . This results in reducing hardware costs as applications no longer need their own server because each virtual machine on the physical server now runs them.

•Virtualization is flexible and powerful when compared to the bare metal installation in physical servers.

•The greatest benefit of server virtualization is the capability to move a virtual machine from one server to another quickly and safely. This is particularly useful during disaster recovery, most enterprise virtualization platforms contain software that helps automate the failover(recover VM) during a disaster.

•Having fewer physical servers means there are less of them to maintain and manage. This leaves your IT staff more time to spend on more productive tasks.

VCenter Server is installed at the primary server of a virtualized data center and operates as the virtualization or virtual machine manager for that environment. It also provides data center administrators a central management console to manage all the system’s virtual machines.

A cluster is defined as “a group of tightly coupled computers that work together closely so that in many respects they can be viewed as though they are a single computer”. A VMware ESX Cluster is no difference.

VMware vSphere Hypervisor
It is a free basic version with full hypervisor access.
It lacks some features amongst which its inability to be managed via vCenter Server and is limited to a maximum of 8 vCPUs per VM.

vSphere Essentials Plus Kits
This Kit adds features such as vSphere Vmotion, HA clustering, Vsphere data protection, replication, vshield endpoint to vSphere Essentials to enable always-on IT for the small environment. Essentials Plus is ideal for small businesses that, in addition to hardware and operation cost savings, are looking for maximization of application availability and business continuity with a low upfront investment. Here as well you can only have a maximum of 3 ESXi hosts and one instance of vCenter Server Essentials.

The main issue with Essentials is one of scalability which can only be addressed by upgrading to one of the Acceleration Kits.

vSphere Standard
This kit has all the Essentials Plus kit features plus storage vmotion, virtual volumes, storage policies, storage APIs etc., per CPU.Here there is no limit on the number of hosts.

vSphere Enterprise plus
This edition has additional features like the DRS clustering on top of the standard edition features which is the main reason companies go for this inspite of the huge cost.

The cost increases exponentially from the Essential kits to the Enterprise plus edition and are deployed based on the necessities of the companies purchasing them. The support for the kits varies from basic to production level and needs to be purchased separately.

The vSphere Client is the principal interface for administering vCenter Server and ESXi.
It is a web-based application that connects to the vCenter Server so IT administrators can manage installations and handle inventory objects in a vSphere deployment.

VMware introduced vSphere Client with the vSphere 5.1 release in 2012. At that time, the product was known as vSphere Web Client.Although vSphere Client was discontinued in vSphere version 6.0, it still has its place. Administrators can use vSphere Client to manage ESXi hosts in organizations that don’t have a vCenter Server.