In contrast, IT cloud is about Cloudification of IT services ,i.e, cloud based service like Saas, Paas, Iaas. In IT cloud, the data centers are centralized. But in case of Telco deployments, network is split between radio and core elements. Going forward the split will change as the concept of distributed data centers will be introduced. One main challenge of NFV/Telco Cloud is the latency and process time between the various elements or functions.

A virtualized network function, or VNF, may consist of one or more virtual machines running different software and processes, on top of standard high-volume servers, switches and storage devices, or even cloud computing infrastructure, instead of having custom hardware appliances for each network function. Examples of VNF being MME, IMS, firewall, gateway, Controller, CPE, Antivirus, Video Optimizer etc.,

• Network functions virtualization management and orchestration architectural framework (NFV-MANO Architectural Framework) is the collection of all functional blocks, data repositories used by these blocks, and reference points and interfaces through which these functional blocks exchange information for the purpose of managing and orchestrating NFVI and VNFs. It is also useful to manage multiple cloud instances and adding specific Telco services, such as better High Availability. The Software Defined Network Management is optional.

The above components form the framework of a NFV system and is equivalent to Telco cloud composition. Refer to the description of the same in the below picture. 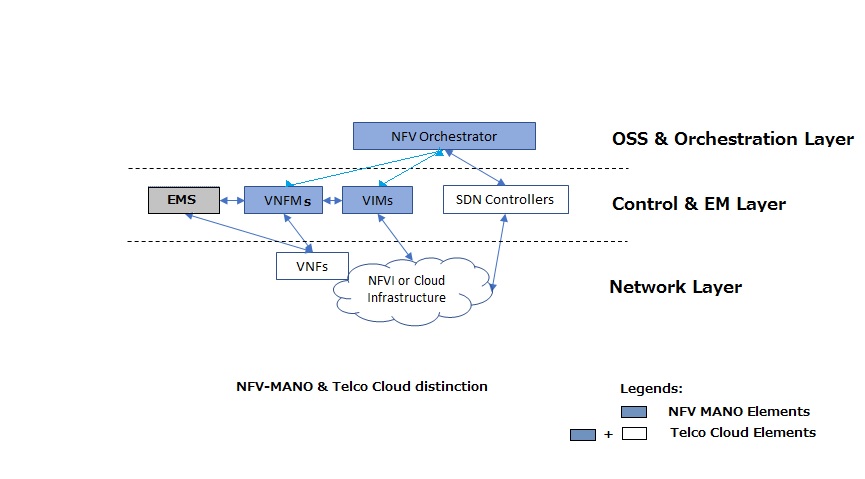 NFV is flexible, cost-effective, scalable, and secure. With these benefits, NFV addresses several trends shaping service provider networks.
•Flexibility: Operators looking to quickly deploy new services require a much more flexible and adaptable network — one that can be easily and quickly installed and provisioned.

•Cost: Cost is a top consideration for any operator or service provider these days. Cost is also reflected in operation expenditure,i.e, how easy it is to deploy and maintain services in the network.

•Scalability: To adapt quickly to users’ changing needs and provide new services, operators must be able to scale their network architecture across multiple servers, rather than being limited by what a single box can do.

•Security: Security has been, and continues to be, a major challenge in networking. Operators want to be able to provision and manage the network while allowing their customers to run their own virtual space and firewall securely within the network.

•Elasticity: To meet the increased traffic demand, operators must have applications that support real time scalability.

A set of network principles where the data and control planes are totally seperated and controlled through APIs.In simple words,SDN technology is a novel approach to cloud computing that facilitates network management and enables programmatically efficient network configuration in order to improve network performance and monitoring.

The control plane consists of one or more controllers which are considered as the brain of SDN network where the whole intelligence is incorporated. However, the intelligence centralization has its own drawbacks when it comes to security, scalability and elasticity and this is the main issue of SDN.

OpenStack is a Cloud Management System which is just a facade that provides a uniform API for provisioning Compute, Network, Storage in a DataCenter. There are different plugins for each of these areas that can plugin into an OpenStack deployment and do the real provisioning work underneath.

Open DayLight is a SDN controller that provisions the network policies as specified and sends that information to the HYpervisor.
OpenFlow is the protocol used to program the Hypervisor vSwitches( which traffic to send where etc) and is the protocol via which an SDN controller communicates with the hypervisors.
OpenVSwitch is the implementation of a virtual switch in the Hypervisor that exposes OpenFlow protocol for flow information and uses the so called information provided via this protocol to make packet forwarding decisions.

The Telco cloud poses a major interoperability challenge. To asssure interoperability, a first step would be to define standard interfaces for the control of the cloud.In November 2012, ETSI was selected to be the standard for NFV. ETSI NFV ISG group was formed subsequently which consists of 300 companies. 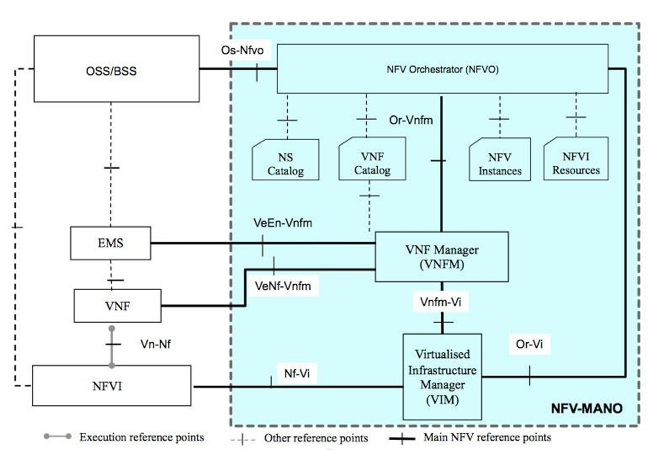 A traditional network needs just one management system i.e. an EMS (or an NMS) or at most supported by an OSS/BSS.
The NFV network, on the other hand, needs multiple managers i.e. a VIM Manager, a VNF Manager and an Orchestrator.And, if they are not enough, there is also the traditional EMS and OSS/BSS. That is, five different management systems.

•VNF Manager: Oversees lifecycle management of VNF instances; coordination and adaptation role for configuration and event reporting between NFVI and E/NMS. VNFM also does the FCAPS of the VNF but only for the virtual part.

The infrastructure and network functions user plane on the left consists of the OSS/BSS, EM, VNF and NFVI.

OSS/BSS includes collection of systems/applications that a service provider uses to operate its business.NFV is supposed to work in coordination with OSS/BSS.
Operation System Support(OSS) deals with network management, fault management, configuration management and service management.On the other hand, Business Support System(BSS) deals with customer management, product management and order management. The existing OSS/BBS, can value add the NFV MANO by offering additional functions if they are not supported by a certain implementation of NFV MANO.

EM is not part of the MANO, however it has important role to play.Element Management is responsible for the FCAPS (Fault, Configuration, Accounting, Performance and Security management) for the functional part of the VNF. The VNF below the EM refers to the services elements.